The game takes place in a medieval fantasy world, in a little kingdom called Chrisandia, in the south of the Marak peninsula. It is not very densely populated and it makes a living from the fishery and the trading with the northern countries. Its actual king, Orlof VI the doughty, is a member of a long dynasty of kings distinguished themselves during the conquests of the era of ashes. During the wars against the evil emperor Sul Rakin, the kingdom demonstrated a great courage despite the losses. The events in the game take place five years after the fall of the emperor, in the year 351 of the era of crystal.

The Shadows of Sergoth is a dungeon crawler in subjective view for the Commodore Amiga, based on the 2018 Amstrad CPC 6128 game by Christophe Petit & Kukulcan.

To run the game you need an Amiga computer with at least 2Mb of chip RAM . A faster Amiga is recommended (A1200 or accelerated) to activate the 3D movement effects and enhance the gameplay experience. The game runs on any graphics chipset (OCS, ECS, AGA).

Team working on the project:

Main features of the game:

3 reviews for The Shadows Of Sergoth 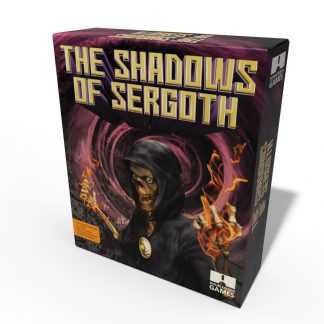