Long and cruel was the Civil War, the brutality of it’s pains which tore into the civilities of the Lands of Greater Rivaria. Now at last, our differences settled, we stand united again yet teetering upon the precipice of our existence. Insidiously, the so-called “Resistance” swelled it’s ranks with the most seditious and foul of enemies. Their leader, still without name, seeks the overthrow of the Highest Sovereign of our Land, the Honourable Lady Carmilla Bane.

Legendary is the Tablet of Uthar. Behold, it was forged by the Gods of Creation, those who brought order and prosperity to our ancestors in the Days of Old. By the hands of their holy power, the Tablet of Uthar is utmost blessed. It holds the power to unite all in our lands to stand strong and defeat our enemies who seek to destroy our way of life… but… it is… fragmented.

Up to ten worthy adventurers are called upon to the Royal Castle to gather the Shards of the Tablet. So great is this current threat that all are called upon regardless of race, origin or creed; so long as they swear loyalty to our Highest Sovereign, Lady Carmilla Bane. By this Quest to unite the Holy Tablet, the people will be inspired to join together within their hearts as a Nation.

Therefore, all are called upon to surpass our imminent peril. Will you answer the call? Will you help lift us from this most desperate hour?

Viscount Beaumont
Emissary and most trusted advisor to Lady Carmilla Bane, the Highest Sovereign of our Land.

Realms of Quest V is a role-playing game influenced by the classics from the 1980s such as Ultima, Wizardry, Bard’s Tale, Phantasie and Telengard.

To play the game you will need a 32k ram expansion. Joystick is recommend but not required.

4 reviews for Realms of Quest V 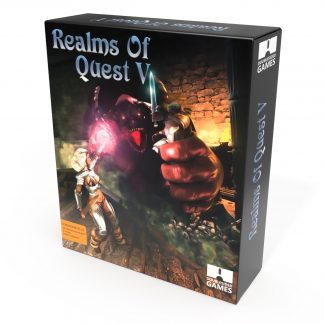